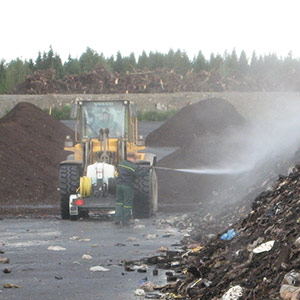 The environmentally friendly OdorOff odor absorbing liquid removes undesired odors from air, solid matter and mass. It is also used in the odor removing equipment. The liquid is clear and acidic but gets a darker colour as it gathers the undesired particles. It may produce a mild almond scent which evaporates quickly. The used liquid can be disposed of by using normal sewers.